Bowling is one of the oldest and most popular games in the world. It has a long and rich history.
Today, Bowling is a sport played and enjoyed by over 100 million bowlers across over 90 different countries.

But how did it all start?


What is the History of Bowling? 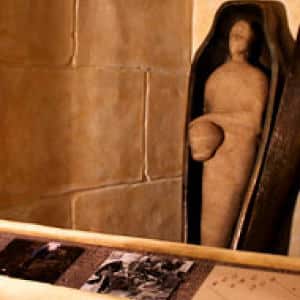 In 1930, British anthropologist Sir Flinders Petrie, along with a team of archaeologists, discovered various primitive bowling balls, bowling pins, and other materials in the grave of a protodynastic Egyptian boy dating to 3200 B.C., very shortly before the reign of Narmer, one of the very first Egyptian pharaohs. Their discovery represents the earliest known historical trace of bowling.

However, a German historian named William Pehle asserted that bowling began in Germany around 300 AD. Monks would set up pins called Kegels, which represented human sins or temptations. They would then throw stones at the pins, thus conquering sin. Kegling is another term for bowling, even today.

It is also believed that King Henry VIII bowled using cannonballs. Henry VIII also famously banned bowling in 1366 for all but the upper classes, because so many working men and soldiers were neglecting their trades.

After it had got banned, Dutch Colonist brought bowling to America in the 17th century. It was regularly played in an area of New York City still known as “Bowling Green.”

Bowling at that time was only nine-pins, unlike today’s ten-pin formation. That was until 1841 when Connecticut law makers made it illegal due to the level of gambling that was becoming associated with the game. This law was quickly circumvented by adding an addition pin which paved the way for today’s ten-pin game.

Bowling was known as a sport frequently played by men. This began to change as the sport became increasingly regulated today bowling is now a unisex sport and is enjoyed by people all over the world.

In 1875, the National Bowling Association (NBA) was formed and adopted a set of standard playing rules. While they agreed on a uniform distance of 60 feet from foul line to head pin and the size of the bowling ball, there were many other disagreements, including scoring, that caused splinter groups to form.

Later in 1895, bowling leaders gathered in New York and formed the American Bowling Congress (ABC). There was a similar organization established in 1916 geared toward female bowlers the “Women’s International Bowling Congress (WIBC)”.

After having organized and agreed upon standards, bowling was booming and grew in popularity.

The period from 1940 to 1960 is known as the “golden age of bowling” due to the sport’s massive popularity increase and advances in its play. By 1945, Bowling was a billion-dollar industry in the United States. From 1940 to 1958, the number of dues-paying American Bowling Congress members grew from about 700,000 to 2.3 million. The Women’s International Bowling Congress increased from 82,000 to 866,000 members, and the American Junior Bowling Congress expanded from 8,000 to 175,000.

In 1958 the Professional Bowlers Association (PBA) was founded.

This era also saw a significant increase in bowling technology. Pins had previously been set by human pinsetters or “pin boys“, but with the invention of the semi-automatic pin-spotter in 1936, the process became much easier.

Ten-pin bowling was introduced in the United Kingdom in 1960. Ten-pin bowling took the UK by storm, and bowling alleys were opening up one after the other.

At its peak, there were over 160 bowling alleys in the UK, but a lack of re-investment and waning interest left the fad in a sorry state.
This led to a general deterioration of bowling alleys, with a commensurate decline in their image.

The United States, meanwhile, saw league bowling soar in the 1960s and early 1970’s. The number of sanctioned bowling alleys in the U.S. peaked at about 12,000 in the mid-1960s, while membership in the American Bowling Congress (ABC) also peaked at just a bit fewer than 4.6 million male bowlers.

Till the mid-1980’s, there was little, if any, new investments in bowling.

Due to the complex scoring system and also because it was all done manually, there was a slight decline in the interest. However, this all changed with the introduction of automated electronic scoring systems.
The general public only had to enter their names into the computers and everything else was done automatically.

Bowling balls have changed a lot since bowling first started. There have been different compositions as well as types of bowling balls throughout those years. 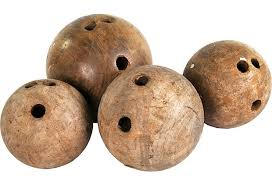 Historically, bowling balls were made from very hard wood “Lignum Vitae”. But that was only until the first rubber ball called the “Evertrue” was introduced in 1905.

In the 1950’s bowling balls were made from Polyester “Plastic”. Which was then changed in the early 1980’s which was when Polyurethane “Urethane” bowling balls became popular.

In the early 1990’s, “Reactiv Resin” material which was still made from urethane but treated with some additives to create pores in the coverstock which allows the bowling ball to absorb the oil on the lane which results in even more friction with the lane.

The latest material to date is when the “Particle” was introduced. With the advancements within the manufacturers, they were able to create even more friction by distributing small particles into the reactive polyurethane cover. 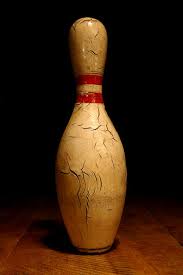 Just like bowling balls, bowling pins have changed over time concerning their overall design.  Just like bowling balls, the first bowling pins were made of wood materials like Maple.  Sometimes the pins were made of stone.
Pins were shaped through the use of a lathe tool. Wooden pins were coated with an exterior plastic coating, and the pins are given a high gloss finish with a polyurethane coating.

Today, the size and weight of bowling pins are strictly regulated by the USBC. All pins have to be no greater than 4 3/4 inches in width, and they must be exactly 15 inches in height: this allows for uniformity regarding pins design.  Every pin is designed so that it weighs exactly four pounds.

The exact date when bowling shoes were first used and manufactured is unclear.  In certain cultures it may have been that footwear while bowling was optional, however, since the game of lawn bowling occurred outdoors, it is relatively safe to assume that shoes were worn by participants in the game.  Of what little traceable history there is related to bowling shoes, historical records indicate that a Dermative shoe was introduced in America in the year 1888.  The shoe was crafted out of leather and had water resistant properties.  These early shoes were so versatile that they proved beneficial for those who enjoyed boating, cricket, tennis, or bowling.  Over time, bowling shoes were crafted with stronger stitching, and since lanes were oiled down so that the ball could move done the lane with greater ease, bowling shoes had to offer superior grip.

The very first bowling games were played on outdoor lawns.  Bowling alleys as they are now appreciated were not developed until the late 1950s and the 1960s.  The first alleys were erected in the western region of the United States and cost a lot of money to build. A bowling alley was erected in Santa Monica in 1959 that cost nearly 2000000.00 to complete. Another bowling alley was created in California in Indio in the 1960s at the cost of $750000.00.  By 1962, a total of nine alleys had been created in the western United States. The largest was situated in El Cajon and was named the Parkway Lanes, which sported sixty alleys for bowling and cost one million dollars to develop.  This bowling alley also maintained five acres of space for parking.

Many of the early bowling alleys had an array of entertaining features.  Developers added snack bars, billiard rooms, cocktail bars, and areas where children could play.  This helped to make bowling appealing to every member of the family and also helped in driving customers to spend more family time at local bowling alleys.  In the early 1960s, bowling alleys were built in places like New Zealand and Australia.

The sport of bowling has grown leaps and bounds from its humble carved beginnings and is still growing today.
New technologies have improved the bowling ball, electronic scoring, monitors that show the path and speed of your ball, and many other aspects of the game.

The truth is, bowling is still growing today, and we are forming the way people will bowl in the future. Sports like bowling are hard to keep up with because it is constantly changing. People think of new and unusual ways of bowling and scoring every day.

Also, bowling today remains one of the best activities for bonding with friends. It’s always a good time getting together with friends and family for a little friendly bowling competition.