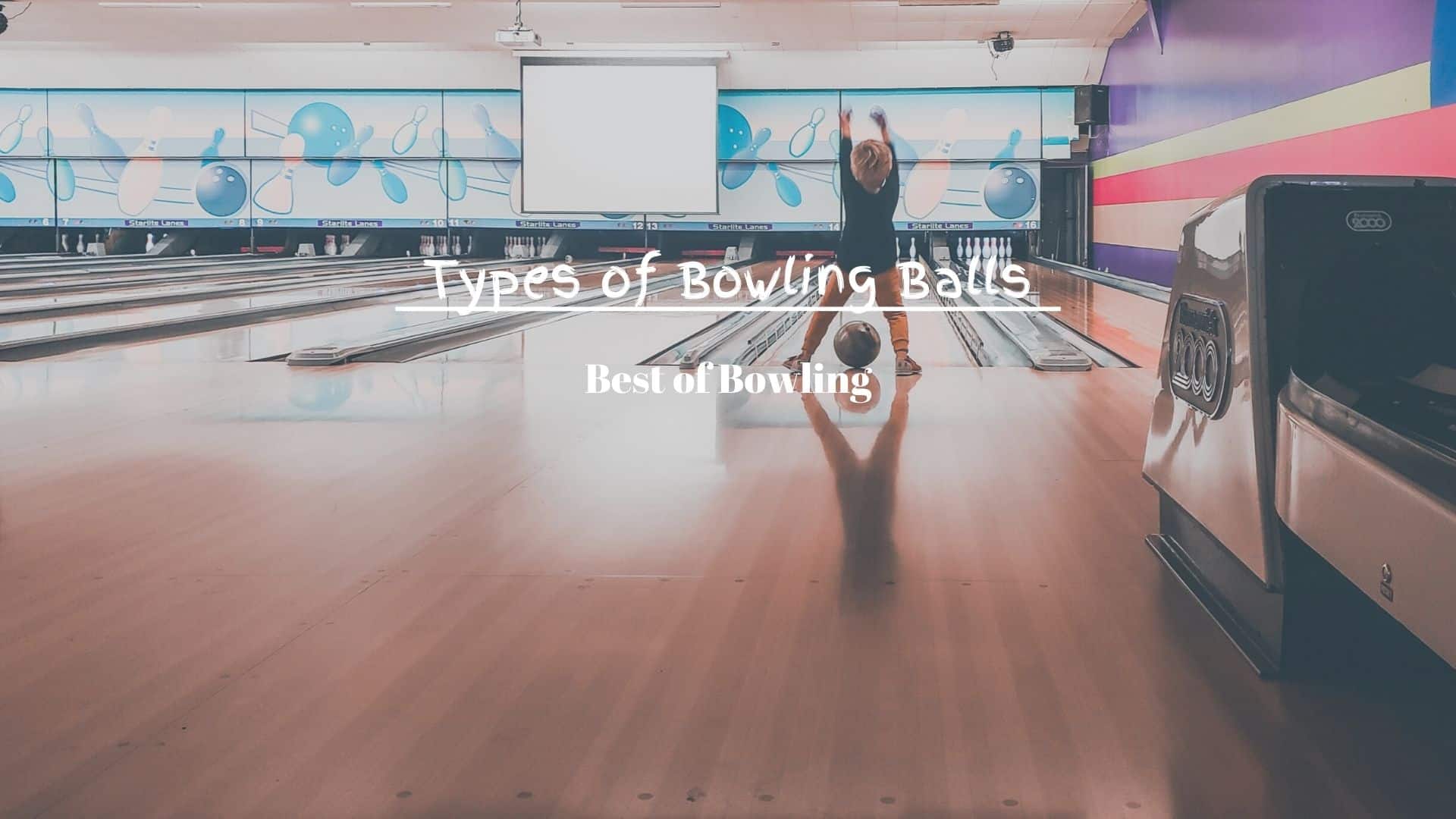 How many types of bowling balls are there? This is probably the most intriguing question in the bowling world. Many bowlers and common men are still unaware of the different types of existing bowling balls. Bowling balls can determine the performance of the bowler in all aspects.

Hence choosing the right ball can be the most challenging task of a bowler’s life. Also, not all balls are suitable for all situations. Practically there is nothing called universal in the world of bowling. Even a single bowler might change the choice of balls at various lane conditions or various games. Every ball has its characteristic feature regarding various factors like flare potential, pin impact, hooking potential, and so on. There is no single parameter that can distinguish between the types of balls.

Bowling balls can be segregated into multiple types and variations depending upon the various components of the ball. If you dissect the bowling balls, you shall get two primary elements that make it up. One is the Coverstock material, and the other one is the centrally placed weight core.

The coverstock also determines the shelf life of the ball and its performance on different conditions of the lane. The nature of coverstock material also influences the friction between the ball and the lane surface that will predominantly determine the rolling length and motion of the ball.

Let us have a glance at the various types of bowling balls depending upon the Coverstock material:-

Polyester coverstocks do not provide outstanding friction. The common types of house balls are usually made of plastic coverstock. The material is not as porous as the other professional ball types. They are hard and have high durability.

It is immensely popular among seasoned players. Urethane is one of the highest-ranking coverstock materials. The durability that this material provides is commendable. It protects the ball against every possible sort of mechanical abrasion.

Another prominent reason for its fame is the superior hook potential. For proactive players, the hooking potential largely determines success. With a higher level of friction between the lane’s surface and the exterior of the ball, the urethane coverstock helps create an enhanced hooking potential.

Players can exert immense control over balls with reactive resin coverstock. They provide the best hook potential. Reactive resin balls find tremendous applications in the world of professional bowling because of their high pin impact. Reactive resin can offer the maximum friction of the ball.

These balls are incredibly versatile. Complying to the name, they can react with practically any kind of lane conditions. They work best under atrocities. You won’t be disappointed with their performance and these balls are a real, worthy investment. Even in unfavorable lanes, these balls can exert their best performance. If you are searching for a ball that can increase your score by every possible means, go for reactive resin coverstock. There are mainly three kinds of reactive resin coverstock types:-

Not many bowlers are acquainted with these types of balls. The proActive coverstock is currently used only by expert bowlers. There are multiple features of this ball, which makes it unsuitable for the use of ordinary amateur players.

Unlike the other types of coverstock materials, the exteriors of these balls are not smooth. The rough, textured ball surfaces are specially designed to tackle heavily oiled lane conditions. This type of ball surface maximizes the frictional force between the lane and the ball, thus enhancing its performance. Handling these balls needs lots of training, and you cannot control these balls if you aren’t well versed in its movements.

The centrally placed weight of the ball will determine the range of motion and the potential of the ball. It plays a huge role in the performance and the control of the ball. The choice of weight varies from player to player. Each player can control a specific type of ball and it mostly depends upon the core type.

The second parameter of differentiation among the various types of balls is the type of weight block. Let us have a look at the multiple types of balls based on the centrally placed core type:-

This is the conventional core type. If you are looking for a basic bowling ball you will find a Pancake core covered with mostly the plastic coverstock. On an apparent look, the pancake type core will look more of a disc type core. The puddle type of core is stuffed with a lot of filler materials. The fillers increase the weight of the balls.

Hence the pancake type balls are more massive than the other types. There are two schools of thought regarding the pancake core type. One school thinks these balls are quite heavy to handle and might baffle even the seasoned players. In contrast, the other school believes that there might be some underlying benefits of the low hooking and flare potential. Pancake type of balls is often considered a subdivision of symmetrical balls because the weight distribution closely resembles the symmetrical type.

The typical ball with equal weight on both sides is called symmetric core balls. The characteristic feature of these types of balls is- low to intermediate differential potential. The symmetrical balls offer much low breakpoint hook potential because of minimal flare potential.

The prime benefit of symmetric core balls is that they provide very smooth arc movements. Many players throw the ball at a relatively lower speed; the convenient arc movement of symmetric cores is of particular benefit for them. Symmetric bodies work very well on drier lane conditions. Symmetric balls are great for amateurs who do not have complete control over the hooks.

Symmetric core balls offer satisfactory pin impact. The crankers normally avoid symmetric cores because of its low aggression. Strokers, on the other hand, can find these extremely helpful as they love to play a more traditional style of bowling game. The newbie also finds symmetrical core to be a better option owing to its high predictability and control.

These balls have a higher intermediate differential. The response time of these types is relatively less; that means they respond very fast. The breakpoint friction is noticeable. Many players prefer asymmetric balls because of the extreme flare potential that they can create.

Also, if you are looking for a ball that is very high on revolution, then asymmetrical core balls can be the right choice. They are quite aggressive and can work nicely well on almost any type of lane conditions.

There are two more terms that you must know when dealing with types of bowling balls.

The pancake type of core is usually attributed as the height mass core and balls featuring this type of core are known as high mass bowling balls. The placement of weight in these types of balls are usually towards the shell of the bowling ball. The ultimate benefit of this type of ball is that they promote extensive length across down the lane. The high mass weight block also prevents the ball from getting into heavy rolling.

These types of balls have a lot of variations in terms of weight, shape, and density. The mass of the weight is centrally placed. This leads to the even distribution of weight across the ball. The hook potential is massive in these types of balls. Low mass weight balls are immensely popular among players because it offers heavy rolling that is well suited for various types of lane conditions.

Holes on the Balls

Depending upon the holes on the balls, bowling balls can be of two types:-

The pre-drilled balls are the ones that already come with holes on their surface. These balls were the conventional ones. You can control them better. The holes are usually drilled keeping in mind the usual preferences and needs of the game.

These days, pre-drilled balls are out of fashion and the bowling world is shifting towards intact balls. Intact balls do not feature any pre-drilled holes on them. They have an intact surface. You have to get the holes drilled on the surface before you can use these. The best part about intact balls is that you can get the holes done completely according to your own choice. The term custom finger fit is quite a fashion these days.

When you drill the holes on the surface of the ball, it becomes exclusive for you. Custom drilled balls are super trendy because they allow the user to control the ball better. The ball becomes exclusive for your use and that is indeed wonderful. However, most of the brands sell both the intact and drilled balls. There is not much difference in the functionality of the ball but the custom drilled balls offer better grip, control, and utility on an individual basis.

The types and features of different bowling balls may be a bit confusing. But hopefully, this article will help to get your ideas sorted. There is no rule which can determine which is the best type of ball for you. The control and comfort of a ball are completely dependent on your ease of use. You can have a fair idea about the different types of balls but there is no single ball that is perfect for all bowlers and in all situations. Multiple technologies adorn today’s bowling world. As time goes on, so do the efforts of making the ball better and more suitable for the bowling needs. In today’s world, prime importance is being laid on customization and versatility.