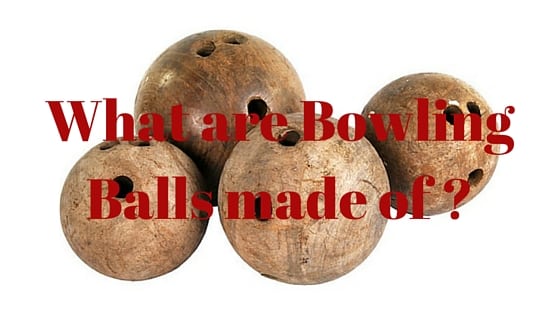 Maybe you’re new to bowling, or perhaps you are only curious what are bowling balls made of, It’s a common question, and you’re not the first to ask this.

Over the past decades, many different materials were used to manufacture bowling balls.

Well, we have done a thorough research here we will be mentioning everything, from the day it all started.

Allow me to share with you this article showing the different types of bowling balls and how it evolved from when it started till today.

When the whole bowling sport was introduced, at that time Bowling Balls were made from dense wood such as Lignum Vitae. But then in the early 20th century, the primarily used material was hard rubber.

In the 1950’s the first bowling ball was made from Polyester “Plastic”. After some time, in the early 1980’s polyurethane (“urethane”) bowling balls were introduced which is still being used nowadays. But the only issue with urethane bowling balls is that they have high friction on the lane surface which allowed for a greater angle of hook.

In the early 1990’s, “Reactiv Resin” material was introduced. Now reactiv resin is still made of urethane but treated with some additives to create pores in the coverstock which allows the bowling ball to absorb the oil on the lane which results in even more friction.

The latest material to date is when the “Particle” was introduced. With the advancements within the manufacturers, they were able to create even more friction by distributing small particles into the reactive polyurethane cover.

Nowadays, all materials mentioned are used but in different situations.

A modern bowler would most commonly use either reactiv resin or particle balls probably on lanes with higher volume and/or length of oil.

Urethane balls are also used, but not as common. They are usually used on drier or less oily lanes.

Last but not least, the commonly used Plastic balls are used as well when the bowler is seeking a straight throw usually to pick up spares.

BONUS! Check out what this dad and son did to know what is inside a bowling ball.

That’s all for the advancements and changes to bowling balls from the day it started till today.

We hope we have made it clear for you and you know now what are bowling balls made out of 🙂.

Please share with us in the comments below your feedback.